The girls, Henrietta & Ken, just before having a dust bath

This is also one of their favorite places to 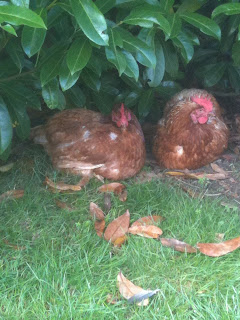 sit and wait until the rain stops. The garden has a few shelters, including their coop for them to sit in if it raining, however it would appear that they love being outside in the rain as much as Duane and I.

Ken has been off laying for the past six + weeks, prior to that she was laying soft shell eggs. They looked like something from an alien film. I thought it was likely that she had reached the end of her laying days and was going to enjoy the rest of her days foraging, sunbathing and dust bathing.

This may not be the case now, as we noticed for the past couple of days she had been sitting on the nest, then yesterday she produced a soft egg. Picture will be uploaded soon. Well done Ken, we would not have minded if you never laid again, we just love hearing your ‘cluck of delight’ when you do lay. I think she may have been having a moult, it was hard to tell as she was also growing her feathers back after being rescued from the Battery farm by Linda & Robert from the http://www.freeatlast.org/ If you have not had chance to read about Freebie, the extraordinary rescue hen, I urge you to do so. As my Mum would say. it will warm the cockles of your heart. I have still not worked out where the cockles of my heart are. It would seem that the extra calcium and cod liver oil supplements may have helped her, coupled with the odd tipple of Cider vinegar.

Ken is a very gentle chicken, after n’ ‘Tucky died, Henrietta, decided she was ‘head hen’, and went from being the least assertive to Ms Bossy Boots. Ken will stand up to her if he needs to. He has been known to stick up for Barbie Q and Bruno, he will peck back at Henrietta, is she is having a peck at the babies. I must replace Ken’s ring, I had to take it off in a hurry when she managed to get it caught in the stake the keeps the eglu door open, imagine flapping chicken pinned by the leg and me frantically trying to calm and free her.

Ken does like to rest a lot, and given the life she had in the factory it is nice to see her do so. Duane rang me the other day to say he had left the kitchen door open whilst making the coop, and realised Ken was no longer with Henrietta supervising the build. He saw the kitchen door was open and made his way swiftly to the kitchen. As he walked in he noticed the door to the dining area and lounge was open and feared the worse. However what he was met with was Ken, sitting asleep in the middle of the kitchen floor. Ken just opened and eye and returned to sleeping. We love our chickens ;o)

This entry was posted in Uncategorized. Bookmark the permalink.