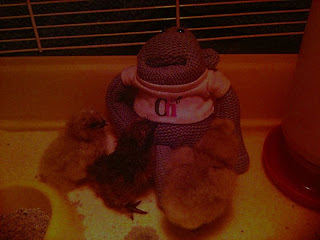 Obama is born. The name could not have been more apt as we were unsure if the egg was still viable when we candled on Day 18. We decided to keep the egg in the incubator in the hope of a hatch. Day 21 came and I picked up the egg for a brief look as it had not peeped, however I did hear a methodical tap, tapping indicating the chicks’ egg tooth was doing its job. Egg # 1 was placed back in the incubator. Those that have been following the blog will know that Egg # 1 had started to pip on the morning of 02/09/10. At this time Onion, previously known as Egg # 5 was fluffing up its feathers and findings its feet in the incubator. Prior to joining Pookie in the brooder, she would regularly wobble over to the ‘yet to hatched’ Obama and throw her body over the egg and cheep encouragement at it.

I am pleased to say that Duane managed to make it home, photograph and watch the birth of Egg # 1 later that day. This chick knew how to zip the egg. I was contemplating calling the chick Zippy after the excellent job that had been done on the egg. The shell had been methodically chipped all around the egg. After a few big pushes a foot popped out. Those that know of Silkies, will be aware that they have five toes on their feet as well as feathers on the outer toe. Their skin is also black. Another big push saw the emergence of a cute, beaked face with a winking eye. Seconds later at 17.55, after a determined push the egg fully opened and the chick was displayed in all its glory. It was a splendid black feather chick, immediately Duane said “Obama, our first black feathered chick”.

Duane will be uploading the photographs of this event in the next couple of days. Obama very quickly found its feet and was weebling (I think I have invented that word) around the incubator like a penguin. Barry, Katie and Heidi arrived shortly after Obama’s birth, Heidi said ‘Oh cute chicks’. and had a quick hold of Onion and Pookie. Jack, Emily & Annabelle had their cuddles with the chicks earlier in the afternoon, having waited patiently since the chicks were born to see them. They were in awe of them and are eager to meet Obama, as is Rachelle.

Obama did not take long in making sure his feathers were dry, fluffed and dry and was able to walk. He joined Onion and Pookie in the brooder just before midnight. As you can see from the photograph, he has quickly adapted to a new environment. Duane introduced him to water by placing a drop on his finger and tilted the water droplet towards Obama who quickly drunk it. You have to teach chicks to drink and the usual method is to dip their beak into the water frequently for the first few days (hence me needing to take leave from work to make sure the chicks were safe and sorted). I have just had a look in the brooder and Obama is snuggled up under Pookie and Onion has her head resting on the Monkey Mum that I placed in the Brooder. Well done and welcome to the world Obama, you know how to get the job done without having to ‘showboat’.

I have marked and set the new mixed 12 eggs in the incubator and have also left in Egg # 4 from this hatch in case it is a late hatch. I did candle it today, there is an egg sac and the characteristic dark shape, however there is no tapping or signs of a pip. I will keep you updated. I Love my Chickens :o)

This entry was posted in Uncategorized. Bookmark the permalink.